The ground works for the permanent building for Watling Park School began over the summer 2016.  This is the beginning of a £5m government funding building scheme to provide more high quality primary school places to the Burnt Oak/ Colindale area of Barnet.

Watling Park School opened in September 2015 with 60 reception aged pupils and will grow year on year until it is full in 2021.  The new building is expected to be completed in Easter 2017, ready for the school to move in permanently in September 2017.  The school is currently situated on former tennis court area of the site where the new building is being constructed and has had further mobile classrooms delivered over the summer for the additional 60 pupils that started school in the first week of September.  The Trust has also been successful in attracting further funding to enhance the temporary facilities, with better security, an additional space for pupils with Special Educational Needs, signage and making the site more attractive.

Planning permission for the new school was granted on 31 March 2016 and will be a huge investment into the local area.  The school will be built on the site of former football pitches, next to the northern tube line, that had not been maintained for a number of years.  After the building has been completed, the plans include an exciting develop of a 3g football pitch, that will be accessible to the local community in the evening and weekends, along with the rest of the school facilities.

As of the second week of September, the picture shows the site being cleared and the foundations for what will be the school hall being laid.

As of end of November 2016, this photo shows the second floor of the building having been constructed. The building is expected to be watertight by the end of the calendar year. 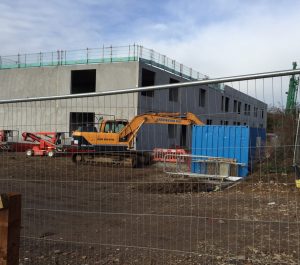 Every time we visit the site at Watling Park School we are amazed at how it is coming along. In December, some teachers had an exciting opportunity to have a site visit and see the progress of the build (see photo below). The children were also able to have a lesson in one of the classrooms and were amazed at how much space they are going to have. Work is now taking place to fit the windows and interior layout and we will post more photos when even more progress has been made. The school is currently arranging for a site visit for prospective and current parents in the New Year, more details to follow. 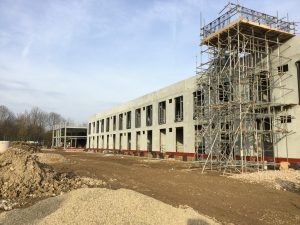