Evendons Primary School, Wokingham has won a prestigious accolade for sustainable school travel with help from Wokingham Borough Council. Evendons is the first in the borough and only the eighth in the country to be awarded the highest possible status of platinum in the national Modeshift STARS scheme. 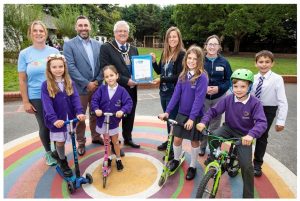 Within the article it states:

“The highlight of the award was when Cllr Keith Baker, the Mayor of Wokingham borough, attended an assembly to present staff and pupils with a certificate to honour their achievement. He talked to the children about his mayoral role before meeting them in the playground as they proudly showed off their scooters and bicycles.

Cllr Gregor Murray, executive member for resident services, communications and emissions, said: “Everybody has a part to play in tackling climate change and I’m delighted that the pupils of Evendons Primary School have shown such dedication to this at such a young age.”

Congratulations to everyone at Evendons!