In the summer term of 2021, Year 5 of Rutherford House School, Balham were inspired to start start a ‘Save the Water Vole’ campaign after  reading the classic novel Wind in the Willows and researching the animal.

They started a petition on change.org hoping for 1,000 signatures.  Since then they have received over 50,000 signatures after high profile media coverage on ITV London News and the story being covered locally and in specialist environmental press. 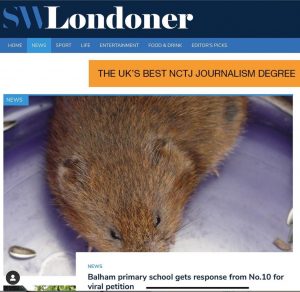 As reported on 1st October 2021 in the SW Londoner, the year group have now received responses from Prime Minister Boris Johnson and the Mayor of London, Sadiq Khan.

In the article it states:

“Head of Direct Communications at No.10 Mandy Goridge responded to the school’s petition on behalf of the Prime Minister.  She told Rutherford House School that while she would be bringing the issue to Defra, the Department for Environment, Food and Rural Affairs, the Prime Minister wouldn’t be able to support the campaign.

Wandsworth Council’s Director of Environment and Community Services, Paul Chadwick, told an Overview and Scrutiny Committee earlier this week that they wouldn’t be able to reintroduce water voles to Wandsworth yet.

He did say that the Wandsworth Council was taking steps to improve habitats in the borough and protect rivers from pollution, citing its recently published biodiversity plan.”

These actions are a good step forward and we are delighted that the campaign has raised so much awareness. We know the staff and pupils involved have learned so much, not only about Water Voles, Pollution and caring for habitats but also about professional communications (PR), Media and TV production, Interview skills and enhanced their persuasive writing skills.